In January 2007 Kay was appointed as Editor of gonatural magazine following on from Conrad Inskip who resigned due to ill health. For more than 8 years, Kay has fitted editing and publishing the magazine around running and growing a successful naturist holiday park with partner Brian Williams, taking extended trips throughout Europe, and promoting the naturist lifestyle in New Zealand and worldwide.

gonatural Magazine began in 1956 as an eight page black and white quarterly publication. The first issue that Kay put together, with help, tips and advice from former editor Les Olsen and his wife Laurel, was a 24 page publication with four colour centre pages. Today the magazine has developed to 44 pages of full colour goodness, including a digital edition, and is almost entirely dedicated to New Zealand naturism with regular contributors submitting interesting articles of their travels and experiences. 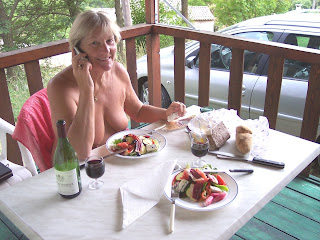 Being a contributor to gonatural Magazine and other naturist magazines around the world, is what began the transformation of Kay’s writing from hobby to career. Travelling extensively throughout Europe, Kay was keen to see her experiences in print so with her companion and partner Brian, an avid photographer, she began to pen their adventures and submitting her articles.


Since late in 2007, Kay has not just edited the magazine, but published, distributed and managed the accounts and in 2009 she entered into a formal contract with the NZNF and became the Managing Editor.

Even when not pressured with a camp ground full of visitors, an upcoming trip away or administrative duties pending, editing and publishing the magazine can be a heavy and daunting task - thank goodness for her patient and understanding partner. But Kay, through her disciplined work ethics and excellent time management skills, has continued to grow magazine readership, along with contributions to the magazines, with submissions for her penultimate issue exceeding the page space available.


It is with much sadness that we must bid farewell to Kay as Managing Editor, but with enormous gratitude for her many years of incredible service and contribution to the magazine and wider naturist community. We have much appreciation also for the healthy state in which the magazine will be handed over to the new team which will manage, edit and publish it going forward.

We hope that Kay enjoys many further trips to Europe with Brian, without working around the magazine, and wish them both safe and happy travels. We look forward to reading more of their travels and experiences in future issues of gonatural…the next chapter.

Bon voyage and au revoir.
Posted by Unknown at 12:29 AM