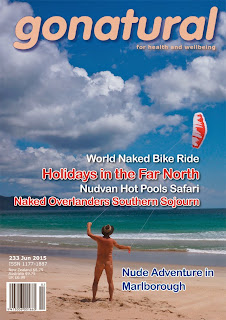 This magazine is packed with an exciting range of events and activities held over the summer. For the first time in my experience as editor, an excess of interesting articles arrived in my mailbox. Those items that didn’t make it will be featured in the September issue.
The steering committee of next year’s World Congress of Naturism are aware that many of you wish to be involved and have outlined a number of ways in which you can help; in addition, the announcement of an International Photographic Competition to be held in conjunction with the Congress.
Andrew and Donna Miller, are the new gonatural Product Merchandisers and have updated the range of products advertised on the website.
An update from NZNF President Wendy Lowe precedes the news that New Zealand Naturists have a new Secretary, Christine Bowers; plus NZNF Webmaster. Hans van Asperdt provides further answers to questions about your websites.
In Takaka for the World Naked Bike Ride, Daniel Jackson commented  “riding in the cold rain is a bit like swimming in cold water”. Paul Campion, from Waitati, wrote “a non-catastrophic ride ended at the beach”.
Auckland Outdoor Naturist Club members hold periodic working bees to weed and plant the Oranui Bush Block, described by Robin Pennell as a “living treasure”.
Peter Woods and his mates now know how wonderful Rotota is, having spent the day exploring the hot thermal stream and waterfall and traversing The Squeeze. Located in the State Forest, Kaimai-Mamaku Forest Park, Ngatuhoa Lodge provided a relaxing few days in January for Cynthia McKenzie and several naturist friends.
Central Otago and Southland areas are renowned for incredible scenery which Possum captures vividly both in word and film. The Naked Overlanders Southern Sojourn held special significance this year as it began with the unveiling of a memorial to a dear friend.
Back up in the Far North, Rolf and Jose Comez found the ideal beach tocreate a unique Christmas card. Still in the Far North, John Lowe joined a new group, Northland  Naturists, who, for a three day visit over Waitangi Weekend found an idyllic site tucked away at the end of a road that goes nowhere… NUDVAN held a hot pools safari. The convoy,  which began near the hot water beach at Kawhia, included John Bowers and his wife Christine.
Marlborough’s Nude Adventure was all about style as our group of happy naturists enjoyed a dinner cruise on The River Queen, with a return trip from Wai-natur in a luxury coach.
The Coast to Coast Challenge between members of Taranaki and Hawkes Bay naturist clubs was hotly contested, and was best described by Wendy Lowe as a draw.
The End seems a funny way to start a story, but after ten years Ruth and Rod Pegg of Skinny Dip Tours have completed their final tour, leaving a gap for host clubs and naturist facilities and more especially for their guests who invariably asked ‘book us for next year please’.
This publication can best be described as ‘my penultimate issue’ of gonatural magazine. At the end of September a new team will take over as Manager and Editor. Among the many reasons … it’s time for change.
Kay Hannam
Managing Editor