The much anticipated and eagerly awaited June issue of gonatural magazine is now available.


You will love the mix of articles featured with accompanying photographs in this mid-year edition - and all of them are about New Zealand. 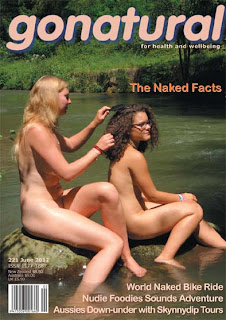 Two are from the most southern clubs in New Zealand - in fact Southern Sun is the southern most naturist club in the World! And it’s always great to receive naturist travel articles - The Ozzie Travellers, Skinnydip Tours and ex-pat Ross Reid all bring you their own experiences in New Zealand.


A weekend with BoP Naturists and the annual Nudie Foodies Sounds Adventure are brought to you by regular writers for gonatural while the Blenheim Sun kindly allowed us to bring you a report on the annual Nude Golf International. There are also articles and photos from recent World Naked Bike Rides in NZ.


You can subscribe online to receive the printed version of this beautiful magazine by mail or if you prefer the digital version this can also be ordered online. The magazine is also available at specialty magazine stores.

Posted by New Zealand Naturist Federation at 3:37 AM No comments: 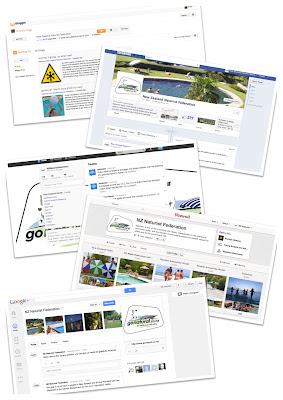 We are social creatures. But being a social creature doesn't just mean having heaps of friends - it indicates having a reliance on others for many aspects of our lives. For example the food we eat being grown, packaged and distributed by others; the house we live in being built by a raft of tradesmen; and also the things that we're interested in drawing us to seek out others with similar interests.

Social media connects us with the people around us who are interested in the same things that we are and also the organisations who can provide an avenue for those interests.

Just as we might communicate with each other in different spoken languages, we each have different preferences of the social networks we engage with. Not everyone is a Facebook user and not everyone "tweets".

The NZNF is serious about getting as many people as possible to "know" us and to reach and engage with these people via their preferred media. Our goal is to connect to people in New Zealand and all over the world who are interested in the naturist lifestyle and to promote it extensively.

Currently we engage with people in 4 different avenues apart from this blog:


“A brand is no longer what we tell the consumer it is – it is what consumers tell each other it is.” - Scott Cook, Co-founder of Intuit
So engage with us and share us with those interested in similar things. We will keep bringing you naturist news of interest via various social networks, because we are after-all...social creatures.

Posted by Unknown at 3:40 AM No comments: